Thornato’s latest full length features a formidable cross-continental cast of special guest vocalists, from Mexican electro-Latin dreamers, Sotomayor, Busy Twist member and Ghanaian powerhouse singer, Zongo Abongo to British Latin-folk minimalist and producer, El Búho. Produced over the last two years yet accelerated during lockdown, Escape Plan is the genesis of Queens-based, sonic voyageur and self-proclaimed ‘sound-hoarder’, Thor Partridge. Surrounded by traditional Greek, Caribbean, African music, at home in rural Sweden and eventually New York City, Partridge fell in love with sounds from all corners of the globe at an early age. Having trained classically in piano and guitar, Partridge became enveloped by the sounds of Dancehall, hip-hop and salsa pouring out from car speakers, shops and apartments on the streets of New York, before Partridge sought to go one step further and meet the people behind the music, spending time in Mali, India, Colombia and beyond, collecting field recordings, linking up with different groups out there, before diving into his own world of sound. “I was always interested in having a balance between more organic sounds and prerecorded sampled sound. I kept audio journals, I recorded conversations, I just wanted to record those special moments. I kept folders and folders of that stuff on my hard drive. Music has always been the centerpiece of it. As long as there is soul and connection, the recordings will carry themselves”. Having learnt his chops DJ’ing at Bembe, a legendary global music hangout in Brooklyn, Partridge took up production, initially putting out bootleg remixes and edits, before redirecting his efforts towards nurturing his own sound and style. A period spent linking with different labels (ZZK Records, Man Recordings) and producers, MCs he met on his travels abroad and in New York, led him to releasing his debut album Bennu in 2017, an international melding of global psych beats, balearic trance and West African drumming, featuring Polaris-Prize winning Colombian breakout star, Lido Pimienta and New York staple The Spy From Cairo, picked up by renowned producer and DJ, Nickodemus and released via his label and “family”, Wonderwheel Recordings. Part inspired by a recent trip to Ecuador (to work with Afro-Esmeraldan ensemble, Grupo Taribo), part determined to dig into his vast archive of recordings with the free time presented during lockdown, his new album Escape Plan is a kaleidoscopic 10-track collection of vocal-led, dancefloor-energising productions made by Partridge since Bennu, that you’ll be wishing you could hear on a big club sound system. However, the central theme Partridge kept circling back to was this idea of an “Escape Plan”, a concept he encouraged the vocalists to explore within their lyrics. “I feel like I’ve lived in the city my whole life. As I’ve got older, I’ve noticed I’ve become really rundown by the congestion, the pollution, the concrete. I was born in rural Sweden, I feel like the core of who I am really resonates with nature and so when I was doing the album, I was thinking so much about my physical and philosophical escape plan. I think it was a tension within me, and really wanting to bust out and that energy led to the tunes just coming out unconsciously better for the dancefloor”. From the hypnotic trance-like Andean bounce of Out Here to the club-ready, twisted techno anthem La Niña Grande, featuring fellow Wonderwheel artist, Sotomayor, Escape Plan is full of richly absorbing and disparate layers. The glorious and beguiling instrumental and heavy 60s cumbia-inspired stomp of Break Away, is lively and conversational, whilst the galloping psychedelic old western meets slow house Fairuz of Yahawa featuring KarenBe & El Búho, and the uplifting, kora-led minimalism of The Fairest featuring Dancehall MC, Jahdan Blakkamore, drive the energy levels higher and higher. Whilst Partridge’s “Escape Plan” out of NYC to the Catskill Mountains later this year is bang on track, his latest album might just provide the soundtrack to the rest of us hatching our own routes out of these crazy times. 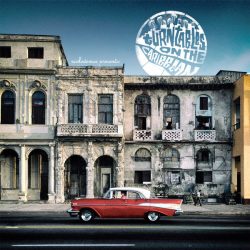